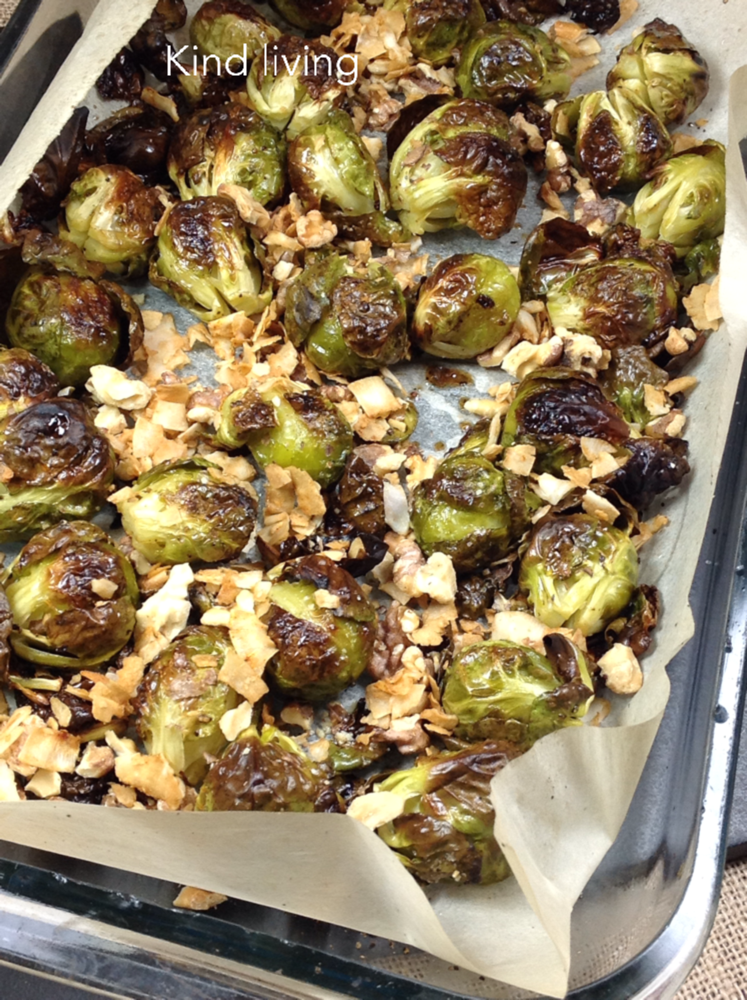 I’ve surprised even myself how much I appreciate these nutrient-dense cruciferous cabbage-like things. They are so very good for you and grow in abundance this time of year in our neck of the woods, which has me even more convinced that they should be included in our diet. If it grows easily in our climate, pay attention; chances are it’s good for you. You would be surprised at the number of “weeds” in your area that are actually a healing elixir (dandelions, anyone?).

So back to our beloved Brussels Sprouts. Meandering through our Farmers’ Market with Erika today (elbowing our way to Fox Foods), I saw these luscious Brussels sprouts and just had to have them. That then got me thinking about how to prepare them in a nice, tasty way. My thoughts turned to bacon (don’t they always?), but my conscience lured me away to seek out vegan options. This led me to Julie, our resident animal activist, who kindly shared her “vegan bacon” recipe. So I thought: sprouts tossed in coconut oil with a generous sprinkling of sea salt and pepper would be a good place to start. Oh, and I forgot to mention that I also ran into Colette of McCutcheon’s Maple Syrup, so it would be rude if I didn’t include maple syrup, too.

You see how my convoluted brain works? I know, exhausting. And because my brain is so exhausted, I thought it would be helpful to include walnuts, which, as we know, are always better lightly toasted.

Let’s start with the vegan bacon. This will make lots, and you can sprinkle it on anything that would taste better with bacon – oh the possibilities!

Vegan Bacon – thanks to Julie A

Preheat oven to 300 degrees F. Combine liquid smoke, tamari, water and maple syrup. Add coconut and be sure to coat coconut flakes well. Transfer to parchment-lined baking sheet. Set timer for 10 minutes, being sure to check frequently as these guys can turn on you in an instant and burn (sigh….learned the hard way). When you remove them from the oven, they will continue to cook and will also dry out a little more. They should be lightly browned, not singed, like batch #1. You can store in a glass jar in the fridge for a week or so.

Toss sprouts in melted coconut oil until well coated. Season with salt and pepper. Roast for about 30 – 35 minutes at 425 degrees. Check frequently and toss a bit to help evenly cook. Once roasted, remove from oven, add walnuts and maple syrup apple cider vinegar combination. Return to oven for about 3 – 5 minutes. Remove from oven and toss with 1/4 cup vegan bacon. Serve with extra bacon and salt and pepper as desired.