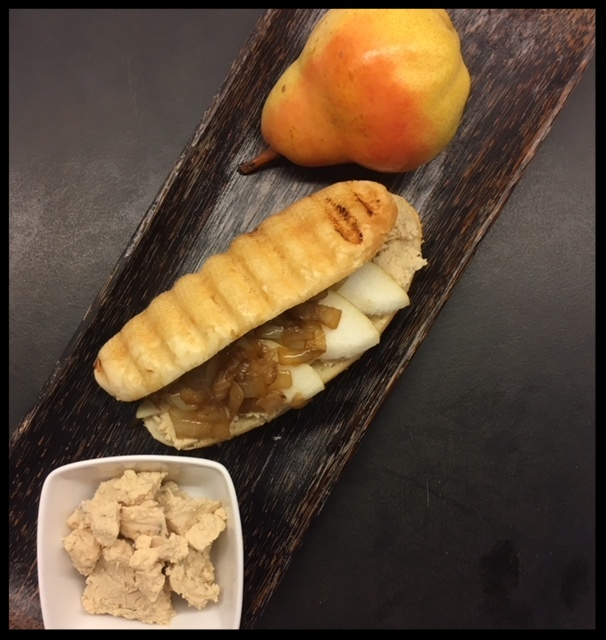 In our early years together, Robb and I frequently enjoyed making deliciously decadent paninis with Blue or Gorgonzola cheese, caramelized onions, sliced pear, fig jam and, wait for it…bacon (oh, the shame). A few years in, we abandoned meat, yet still very much enjoyed cheese. While we still enjoy cheese, we are making steady efforts to minimize dairy in favour of plant-based options.

While considering the Recipe portion of the newsletter earlier this week, I thought “how about making one of our favourite paninis vegan?” While I have tried several plant-based “cheeses”, I have not yet tried my hand at making gorgonzola or blue cheese. Searching some of my online favourite sources, I happened upon several options. Many of them were rather complicated and required days if not weeks to prepare. I was delighted, however, to find one option that was super easy and only needed 8 hours to set.

For sure, this recipe requires some pre-planning, but it’s nice to know there are tasty plant-based options that are easy to prepare. And let’s face it; if you were going to make your own homemade dairy cheese, it would take much longer than 8 hours to prepare!

As an aside, what I thought was particularly “cool” about this recipe is that the “blue veins” that you find in blue cheese are made with spirulina! In this case, I used a combination made by PaleoEthics. It’s a super greens blend of spirulina, spinach, kale, parsley, kelp, moringa leaf and organic chlorella.

As luck would have it, Dan was home after his first day of his summer job working with the City of Orillia. Dan is a hearty eater and was only too happy to test-drive these on behalf of the Kind Living readers….such a sacrifice!

Heat oil in a large skillet (I love my cast iron pan for this). Add onions and sauté until they soften and caramelize. Patience is key here. Time and moderate heat make for the best caramelized onions…they hate to be rushed!
Once onions are done, it’s time to assemble the panini buns. Spread a generous amount of the gorgonzola on one half and jam on the other. Layer with sliced pear and onions. Put in panini press until desired level of doneness. Enjoy!